skip to main | skip to sidebar

i like art. yeah...i said it. artists are supposed to be cool and smooth, but i get all caught up in the wonder and act like a fanboy at a comicon. i like going to art museums and looking in all the rooms...even the ones i dont particularly get. and oh yeah...i said that too. there's some art i just dont get. like a painting thats all blue...and entitled...BLUE. i get all excited when i see stuff i like. ive even been known to jump up and down and giggle.

so there i was...minding my own business in life, when someone invited me to an art show at the c2 open art studio. i dont even remember who it was...but i do remember loving it. so if it was you, thanks!

the theme of the show was 'the four horsemen' and it was so laid back and unassuming from start to finish. first of all, it's in one of dayton's front street warehouse buildings...which is kinda horror-movie-looking at night. anybody ever see the mangler? so anyway...i walk up the rickety stairs, not knowing what to expect.  was it really a clever plot to get me into a scary building to kill me...orrrr...will it be a refurbished loft full of yuppies? will i look like a complete moron in a gaggle of art snobs? at the top the stairs...was...a sea of the coolest people. some of the best people ive ever met. old friends & new friends, pretty girls & handsome guys, friendly & funny, creative, talented, amazing people. the colors and styles of the people in that room were as varied as the art on the walls...and i was in love!


one of the guys that helps run these shows, is a guy i went to jr high with (mike guidone). he casually mentioned that i should hang some stuff at a future show...having not seen any of my work. now...this guy runs a tattoo shop. he sees and creates beautiful art every day. not to mention...his paintings are impressive, to say the least. the thought of putting any of my art next to his was intimidating. then i met jason goad. no words. his art is specfreakintacular. im a groupie. hahahaha...really, we've now become pretty good friends. thats a story for another post.

the show that mike talked me into painting something for, was a benefit for the american heart association. i tried to get out of it. i waited until the latest possible moment. then i emailed mike and confessed that i hadnt painted anything since high school. didnt stop him. he told me to have at least one piece to him by that friday afternoon.  it was wednesday. PANIC!! i spent the entire friday morning painting. and this is what i got: 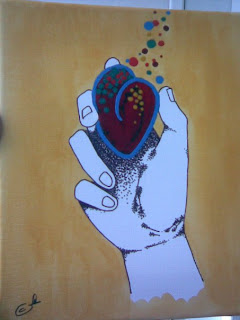 i was still trying to find a way to get out of it. maybe if i wrecked my car on the way there...or passed out in the middle of his shop (which was possible). well...i got him the painting and left like i had jumped off a cliff. there was no going back now. i actually visualized running back in, snatching it off the counter and running back out screaming like the building was burning down.

the show was saturday and i had to work until 11pm. i hurried there, saw my piece on the wall and from afar, i could see something was written on the tag. what the....? it said SOLD! wait...sold....like someone bought it? like...someone liked it? i went up to jeffie and said, "are you guys screwing with me?" "nope. someone bought it. heres her number." it was legit. my first piece sold. no way.

so yeah...ever since then, ive been painting feverishly. i forgot how good it makes me feel. how its like going to another world. i put my music on and just go...and go...and goooooo.

Promote Your Page Too